Ed Smith began as a collector of literary first editions in the early 1980s. In 1990 he established his own firm, Ed Smith Books. He became a member of the ABAA in 1995 and has served on the their Board of Governors. He lives on Bainbridge Island, WA and specializes in Modern Literature, First Editions, Photography, Screenplays, Signed Books, and Appraisals of Books and Photographs. His appraisal work includes the estate of Hunter S. Thompson, and JFK's personal photographer Jacques Lowe.

Crumb, Robert & Michael "Aitch" Price. R. CRUMB COMIX; THE PLAY. CORRESPONDENCE AND PRODUCTION MATERIALS. 1980s to 1990s. Robert Crumb and Mike Price joined forces during the 1980s to produce a stage play, R. CRUMB COMIX: THE PLAY, with stage director Johnny Simons at Texas' Hip Pocket Theatre in Fort Worth. This archive contains related original correspondence from R Crumb to Mike Price in the form of 17 ALS's, 8 Postcards written and signed by R; Crumb, some 11,000 words, plus related production materials and ephemera, all housed in glassine sleeves in a 4-inch pin binder. The archive was assembled by Mike Price, a long time Fort Worth journalist, author, movie historian, comic book writer, and musician. Price was the musical director for the play COMIX under the auspices of his Cremo Studios. Most of the correspondence, in R. Crumb's unmistakable hand, is postmarked from his Winters, CA address (a few from France) along with related production materials including; the original soundtrack for the play, on two CD's, 9 Crumb unused postcards (circa 1980), 6 color slides from the play (some of R. Crumb), a prop from the play (a full-page negative of 'Uncle Bob'), a color photograph of Robert and Mike Price making music at the theatre, newspaper articles relating to the play, to 'Keep on Truckin', articles about Crumb's career, etc. Mike Price's musical knowledge and musicianship, his understanding of the whole cartoon landscape and history, old-time blues music, old time cartoons and what came before, his musical roots, all of these traits drew in Robert and made him part of THE PLAY. Most importantly it was the respect Crumb and Price had for each other that help illustrate the enthusiasm each had for creating their own brand of art. Also included in the correspondence are topics like: the documentary by Terry Zwigoff, and a screenplay written by both Crumb and Zwigoff while awaiting financing for the documentary, called "SALLY" patterned after BIG FOOT which Robert has a long time obssession with (focusing on his AMAZON woman character), also photographs advertising the documentary, some of Crumb's 'Blues Cards", and many other gems. An amazing archive that provide a wealth of insights into Crumb's creative process. All items in very good to near fine condition.  [14104]$19,500.00

Kesey, Ken ONE FLEW OVER THE CUCKOO'S NEST

Kesey, Ken. ONE FLEW OVER THE CUCKOO'S NEST.New York: Viking Press, (1962). First edition. First issue book and dust jacket. Basis for the 1975 big screen film directed by Milos Forman that starred Louise Fletcher and Jack Nicholson. Winner of five Academy Awards; Best Picture, Actor & Actress, Director, and the Best Writing (Adapted Screenplay by Bo Goldman). Set in an Oregon psychiatric hospital, the narrative serves as a study of the institutional processes and the human mind as well as a critique of behaviorism and a celebration of humanistic principles. The book is bright and fine. The dust jacket is nearly fine with only minor wear to extremities. Flap price present. A stunner, for this title.    5000. 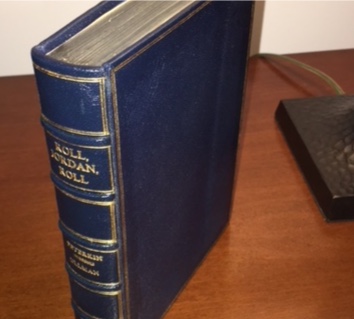 Peterkin, Julia & Doris Ulmann. ROLL, JORDAN, ROLL. New York: Ballou, 1934. Second edition (stated). Text by Julia Peterkin, and with photographs by Doris Ulmann. This book describes the religious life and community of the Gullah, a group of people of African descent living in the coastal areas of South Carolina and Georgia. Wonderfully illustrated with Ulmann's black and white photographs. An exploration of this book, and the relationship between its text and images, it becomes clear that Ulmann's photographs should be considered as artworks that function independently of the text. Rebound in a simple but elegant full blue morocco, marble end-papers, with raised bands and gilt lettering. A fine copy.      950.

Saramago, Jose. BLINDNESS. A Novel. London: Harvill, (1997). First edition in English. Translated from the Portuguese by Giovanni Pontiero. This stunningly powerful novel, of a man's will to survive against all odds, was mentioned specifically when the author won the Nobel Prize for Literature (1998) A fine crisp copy in a fine dust jacket.     1250. 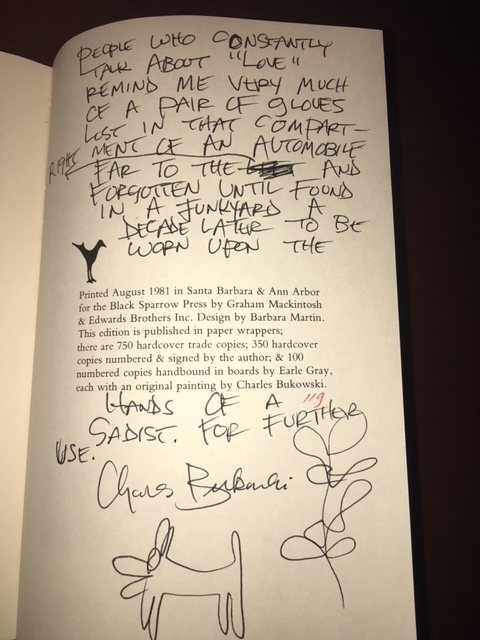 Charles Bukowski DANGLING IN THE TOURNEFORTIA

Bukowski, Charles. DANGLING IN THE TOURNEFORTIA. With Manuscript Story!Santa Barbara: Black Sparrow, 1981. First edition. #119 of 350 hardcover copies numbered and signed by the author. Occasionally, Bukowski would take a break from the tedium of signing, and, let his mind wander and, he would write down whatever came into his head in that instant. Like a mental erection, that had to explode on the page, and, in this copy, though only his signature was called for, he wrote down his thoughts at that instant; "“People Who Constantly / Talk About “Love” / Remind Me Very Much / Of A Pair Of Gloves / Lost In That Compart- / ment of an automobile / Far To The Right And / Forgotten Until Found / In A Junkyard A / Decade Later To Be / Worn Upon The / Hands Of A / Sadist. For Further / Use.” Signed “Charles Bukowski.” With two original drawings, a dog, and a large flower. One close to Bukowski made this comment regarding this one-of-a-kind copy: "As Hank would endlessly sign colophon pages for BSP, he would VERY occasionally break the boredom by decorating the page. I think over those many years, I saw 3-4 such pages, but NONE as artful and exciting as this example!" 281pp. a selection of poems full of wit, struggles, perception, and simplicity. Charles Bukowski writes of women, gambling and booze while his words remain honest and pure. A very good plus to near fine copy in the original cloth and boards with acetate dust jacket.  3750. 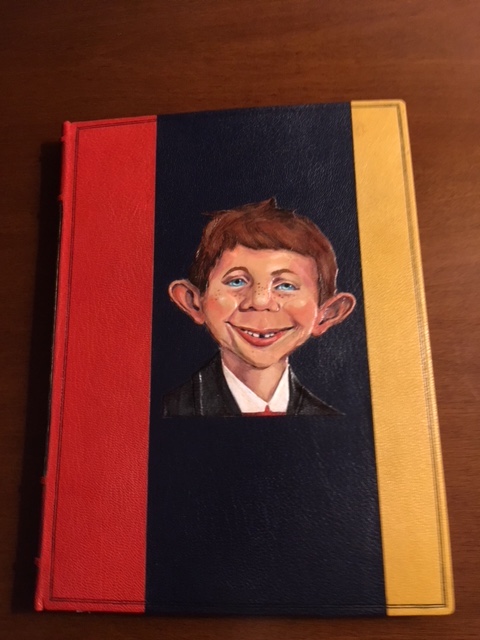 (Mad Magazine). MAD FOREVER. A New Collection of The Best from Mad Magazine. With an Introduction by Steve Allen. New York: Crown, (1959). First edition. 4to. Rebound in three panels of yellow, red and black leather, with a large leather onlay making up a portrait of a truly amazing likeness of Alfred E. Neuman, the fictitious mascot and cover boy of this iconic magazine still published today. His features are raised, creating an almost 3-D like image (hand-colored for depth and shading by artist Emilie Crewe). Mad Magazine was first published in 1954 in paperback. The first hardback published by the magazine was in 1958, "Mad for Keeps". The second hardback published by Mad Magazine was this one, 'Mad Forever', in September of 1959. The binding is fine, the contents , including a section in color, are very good plus to near fine.    $1,250.00

Bukowski, Charles. THE FIRST FIVE (5) BLACK SPARROW PRESS BROADSIDES. Each is 1/27 Signed by Charles Bukowski, 1966. Los Angeles: Black Sparrow Press, (1966). First editions. They are: TRUE STORY - ON GOING OUT TO GET THE MAIL - TO KISS THE WORMS GOODNIGHT - THE GIRLS / FOR THE MERCY MONGERS - THE FLOWER LOVER / I MET A GENIUS. The first three feature one poem each, the final two feature two poems each. Each broadside is 1/27 copies (of a total edition of 30), and each broadside measures 14 1/2 x 10 inches, and each broadside is signed by Charles Bukowski. A fine and complete set of these rare broadsides which comprise five of the first six titles published by the Press. Produced at a time when Bukowski was virtually unknown by the public. Housed in a custom-made chemise and clamshell box. All fine copies. Single sheets.    $27,500.00

Spielberg, Steven. A CELEBRATION OF THE HUMAN SPIRIT. An American Jewish Committee Tribute to Steven Spielberg. Los Angeles: The American Jewish Committee, (1997). First edition. 4to. This copy is boldly signed by Steven Spielberg on the title page. From the Dedication: "Steven Spielberg is a celebration of the human spirit. In his family, he celebrates the human spirit. In this work, he celebrates the human spirit. In his life, he celebrates the human spirit. And so this book - A CELEBRATION OF THE HUMAN SPIRIT - is dedicated and presented to Steven on the occasion of his receiving the American Jewish Committee's Sherrill C. Corwin Human Relations Award." 92pp, filled with large black and white photographs, some from his life, some from his films and some that are bigger than life. Created by Judi Kaufman, and edited by Elinor Goodman. Dedication by Bruce M. Ramer and a foreword by Rabbi Gary Greenebaum. Bound in black leather with gilt lettering. A few marks to the front cover, otherwise near fine condition.   $1000.

Thompson, Hunter S. FEAR AND LOATHING: ON THE CAMPAIGN TRAIL '72. With Illustrations by Ralph Steadman.San Francisco: Straight Arrow Books, (1973). First edition. An advance, prepublication copy, slip laid in, along with a black and white photograph, 5 x 7, of the book with the dust jacket front panel and spine showing. A collection of articles covering the 1972 presidential campaign, which were first serialized in Rolling Stone magazine throughout 1972 (and later released in 1973). The book focuses almost exclusively on the Democratic Party's primaries and the breakdown of the party as it splits between the different candidates. The book is as new, the first issue jacket is fine with the slightest of wear to extremities.      $500.00

Casanova HISTORY OF MY LIFE 6 vols

Casanova, Giacomo (Chevalier de Seingalt). HISTORY OF MY LIFE. First Translated Into English In Accordance With The Original French Manuscript By Willard R. Trask. With An Introduction by the Translator. 12 Volumes in Six Books In Slipcases. New York: Harcourt, Brace & World, Inc, (1966). Stated First Edition. 12 Volumes in six books housed in the original publisher's slipcases with a cover label on each side of the slipcase. Each book with 32 illustrations. Translated from the original French. Copious notes elucidate the social, biographical, and geographical background. Brick red cloth with gilt lettering, issued without dust jacket. Matching slipcases with a large label on each side. All volumes are near fine to fine, all slipcases are very good plus to near fine.     350. MoreDOROTHY LANGE. With a Critical Essay by George P. Elliott

MoreTHE LOWLAND. A Novel. Signed by the Author